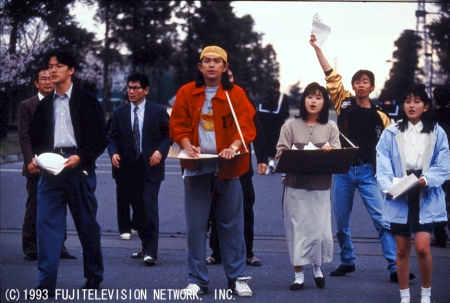 It had a first season in 1993 and a second season, titled Hitotsu Yane no Shita 2 (Japanese), in 1997. It was very popular in Japan, with its highest rating being a remarkable 34 percent and it was also exported to other regions in East Asia. It features Yosuke Eguchi, Noriko Sakai and Masaharu Fukuyama as its leading characters.

Seven years ago the Kashiwagi couple were killed in a car accident. They left behind six children, who were forced to live in different families of relatives and adopters. Tatsuya Kashiwagi, the eldest son, was a Marathon runner. He opened a small laundry shop after retire and was ready to marry his coach’s daughter. However, his biggest wish is to find his five separated siblings and form a family together. However, throughout these years, the six brothers and sisters lead their own lives without communication to each other. While Tatsuya is very eager in uniting the family, his siblings, with the exception of the edldest daughter Koyuki, are apathetic towards his suggestion. They are having very different lives, including the heir of a big hospital, a juvenile delinquent, etc. The youngest brother was also handicapped in an accident. Confronted with all the difficulties, Tatsuya still decides to reunite the family so that they can live “under one roof”. To accomplish this wish, he overcame various difficulties, and even sacrificed his own marriage prospectus…