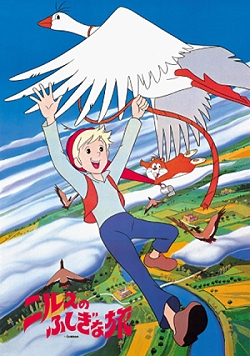 小神童 The Wonderful Adventures of Nils

The Wonderful Adventures of Nils is an anime adaptation of the novel by the Swedish author Selma Lagerlof. The 52 episode series ran on the Japanese network NHK from January 1980 to March 1981.

Plot summary: Nils Holgersson is a 14 year old farm boy, the son of poor farmers. He is lazy and disrespectful to his fellowman. In his spare time he enjoys abusing the animals in his family farm. One day Nils captures a tomte in a net while his family is at church and have left him home to memorize chapters from the Bible. The tomte proposes to Nils that if Nils frees him, the tomte will give him a huge gold coin. Nils rejects the offer and the tomte turns Nils into a tomte, which leaves him shrunken and able to talk with animals, who are thrilled to see the boy reduced to their size and are angry and hungry for revenge. While this is happening, wild geese are flying over the farm on one of their migrations, and a white farm goose called Morten attempts to join the wild ones. Nils manages to flee on Morten’s back together with his new hamster friend Carrot, and they join a flock of wild geese flying towards Lapland for summer.

The wild geese, who are not pleased at all to be joined by a boy and a domestic goose, eventually take him on an adventurous trip across all the historical provinces of Sweden, they encounter many adventures and characters like Smirre. Along the ride and at the same time the characters and situations Nils encounters make him learn to help other people and not be selfish. During the trip, Nils learns that if he proves he has changed for the better, the tomte might be disposed to change him back to his normal size.